Using an 8 x 7-segment SPI display with the BBC micro:bit 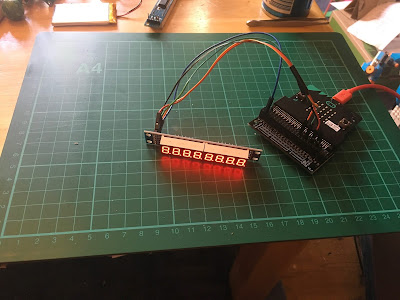 Introduction
I got sent ten (!) of these MAX7219 displays by accident when I had ordered something completely different on Aliexpress, so I thought I'd better learn how to use them. As usual, there are some Arduino libraries for these, and also for the Raspberry Pi but I could only find one example for the BBC micro:bit. That example is a mashup of two different drivers but, when I tried it, I found that quite a lot of things didn't work properly. In any case, I don't really like just plugging in someone else's driver because I prefer to understand what is going on "under the hood". Also, using modules with the micro:bit is a bit of a pain as it's a two-stage process which slows down program development and debugging.

So, armed with the MAX7219 data sheet, I decided to work things out for myself.

Connecting things up
This is very straightforward. The display has five pins. Apart from VCC and GND (it's 3.3v-friendly), there is DIN (data in), CS (chip select) and CLK (clock). As it is an SPI device, the default connections on the micro:bit are CLK=P13 and DIN=P14 (although these are just the defaults - you can use any pins). In addition, you'll need to connect CS to any micro:bit pin (I used P0).

Micropython code
The good news is that testing your connections is easy because the MAX7219 has a test mode which overrides any other settings so it should work every time. The photo above shows "test mode", where each segment of each digit is lit up at full intensity. The MAX7219 is programmed by sending 16 bits, of which the 4 "most significant bits" are ignored, the next 4 bits are the register addresses and the 8 "least significant bits" are the data to send to the registers. Referring to page 10 of the data sheet, to enable the "display test" mode, we need to send the register address 0xXf (where X is "don't care), followed by 0x01. Try this (using the Mu editor):

That's the easy bit! The tricky thing I found about using this display is that (apart from "display test" mode), nothing will work as you want it to, unless you make some essential settings. The data sheet explains what each of the registers is for, but it took me a while to realise that nothing much works unless you configure the following registers as below:

In addition to that problem, some of the settings are persistent after a power-down, so you also need to clear all the registers to start with (because there is no way to find out what the existing settings are). So, the things to remember are that you need:

Here's an example program showing how to put it all together. In the example, I have used a python dictionary to hold the bit patterns for all the numbers and most of the letters of the alphabet. 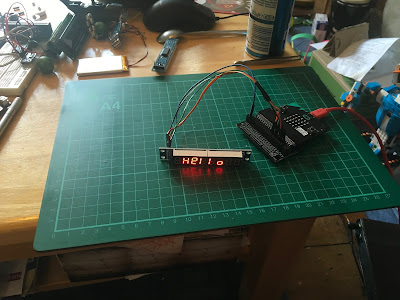 Posted by SteveSmythe at 17:50 No comments:


Introduction
In my previous post, I described how to connect and code the Microchip MCP9808 digital temperature sensor. That allowed you to send accurate temperature data via the REPL to a connected PC.

In this post, I shall describe how to send the temperature readings to an LCD screen. This could be the basis of a BBC micro:bit weather station or data logging project, or maybe for environmental control. N.B. I wasn't going to risk leaving my micro:bit in the freezer long enough to see how cold it really is - apart from anything else, I doubt whether the LCD would be too happy at -18 °C! 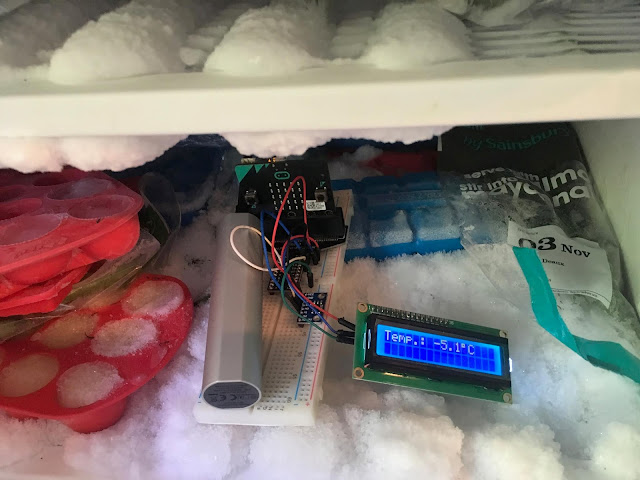 I came across a post on the excellent MultiWingSpan website showing how the micro:bit could be used with a Sparkfun Serial Enabled 3.3V 16x2 LCD Character Display. Unfortunately, those displays are quite expensive (around £24), whereas you can pick up a parallel (5v) 16x2 LCD screen for as little as £2. If you already have one of the Sparkfun ones or don't mind buying one, you can skip the next section.

So how can we make our own (cheaper) equivalent to the Sparkfun serial LCD?
The microbit is a 3.3v logic level device, so first we need an LCD screen that will work at that voltage. You can either pay a bit more and get a 3.3v screen (but they are hard to come by in the UK), or convert a 5v one, like I described in an earlier post.

Next, we need a serial UART LCD backpack like the Sparkfun one. I happened to have bought one from Proto-Pic in a sale last year for the princely sum of £2.40. They have discontinued that now but Hobbytronics in the UK sell a similar one (and, as a bonus, it also works over I2C) for £6. All of these backpacks have their own microprocessor that converts serial UART data into the correct parallel format for any display based on the Hitachi HD44780 compatible interface. 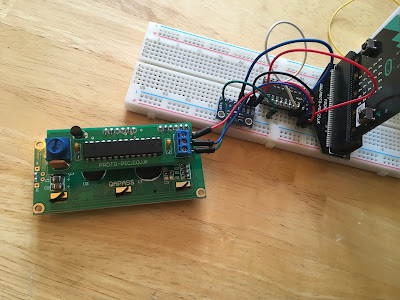 Adding up the cost of components (using the Hobbytronics backpack), it comes to about £9.

Connecting things up
Please refer to my previous post for connecting and programming the MCP9808 digital temperature sensor. Also have a look at the MultiWingSpan post for how to use the serial backpack. Depending on which serial backpack you are using, you may need the datasheet. My Proto-Pic one was very similar to the Sparkfun one but not identical so, if you find characters not appearing on the right row or column, that could be the reason. For convenience, I connected the data connection on my backpack to micro:bit pin 12 - the same as in the MultiWingSpan post.

Micropython code
I borrowed MultiWingSpan's code for the function "move_cursor(row,col)" for sending data to the serial backpack as it is very neat! I have extended it to work with 20x4 displays as well as 16x2. As mentioned above, the Proto-Pic backpack uses a slightly different addressing scheme from the Sparkfun display so I had to adjust the numbers a little as characters weren't coming out in the right place. I also had to look up in the HD44780 datasheet how to send special characters such as the degree symbol ° (decimal 223).

# wait half a second for the splash screen
sleep(500)


# wait half a second for the splash screen
sleep(500) 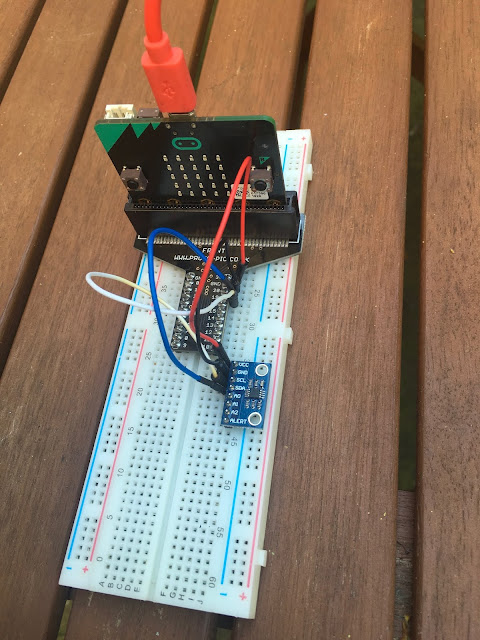 
In my next post, I will describe how to connect a 3V LCD screen instead of sending the temperature readings to the REPL. Then you will have a stand-alone digital thermometer which can be used, for example, as part of a weather station project, data logging, or for environmental control.
Posted by SteveSmythe at 19:54 No comments: